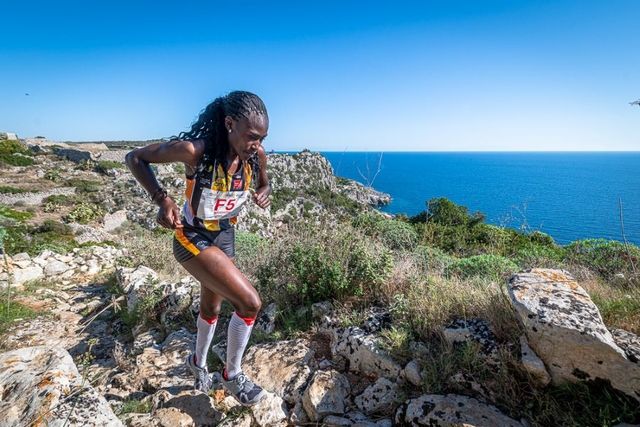 Stage 11 of this year’s World Cup took us to a venue with a difference! Instead of a traditional mountain setting, Trofeo Ciolo takes place on the coast in Puglia, right down in the heel of Italy. But ‘different’ definitely doesn’t equal ‘easier’ here because this 11.7km course packs 640m of ascent and 518m of descent in almost continual climbing and descending on technical, rugged paths.

As a taste of what was to come the race started with a steep, short uphill, which immediately started to spread out the field of runners. Because this first climb was on a narrow path the organisers set the women’s off 5 minutes ahead of the men, to ensure that all the women were through this first section before the first men came through. With the rest of the course being wider and allowing for easier overtaking, this measure made sure that nobody’s race was disrupted.

In the women’s race it was Njeru and Murigi who struck out from the start. By the 5km point they had opened up a small lead over Gaggi (+50sec), Scaina (+1min 25sec) and Morgan (+1min 45sec). Before the start Morgan, who sustained cuts and bruises from falls in winning our last World Cup race at Canfranc-Canfranc (long race), declared that she was fully recovered from these superficial injuries and that 11km was a bit short for her, but she was going to ‘give it a go’. In the early stages she was as good as her word and staying in touch with the leaders.

For the men the top 5 were slightly closer at the same point. Mamu led it out from the start but hot on his heels were Vender, Ndungu, Baldaccini and Daniel Pattis (ITA), with around 15 seconds separating them. It looked like it was going to be a very close competition.

At the famous Ponte Ciolo at the 10km point we waited to see how the preceding 5km of rocky undulations had shaken up the field. Njeru came through first for the women, but Murigi was just 5 seconds behind her, with a bigger gap back to Gaggi and Scaini. Mamu had stretched out a lead of 50 seconds for the men, with Baldaccini, Vender and Ndungu leading the chase with just 1km to go!

It was another exciting World Cup race with a top field in a stunning setting. There are just 5 races left in this year’s competition but now they come thick and fast in just over 2 weeks: