The Spanish National Team Trail Running Championships took place this weekend in Ibiza. The race was in the style of a Classic WMRA Mountain Race over 21k with 872m of ascent. This is somewhat of a departure for Spanish mountain racing, which traditionally prefers the vertical uphill or long distance races.

As Juan Carlos Granado of RFEA noted during the event, this event has served to identify athletes with the potential to be in the Classic test in European and Worlds 2021. At the 2019 World Cup, Spain won three medals in Long Distance, but were not as competitive in the Classic Distance.

With good weather and a quiet day, the runners’ start times were staggered. Every 30 seconds they were set off, with maximum groups of 10 people, one per team present. Athletes had to carry with the usual mandatory kit including whistle, mobile phone, chip, thermal blanket and bib, as well as a mask. The mask was not necessary in competition, but on the finish line and after crossing the finish line.

The team gold went to VALENCIA, with Andreu Blanes as winner, hot on the heels of his 1.03 at last weekend’s Valencia Half Marathon. He won with a spectacular 1h21m27s. He was accompanied by another proven elite, Antonio Martínez, who finished in the top 10 of the 2019 World Cup and recently won the 16k at Canfranc. He finished in the top 5 with a time of 1h25m40s. Ricardo Cherta tied the Gold with 8th place and a time of 1h27m01.

Silver was for a solid ANDALUCIA that repeated podium after 2019. The white-green team was led in a great career of two of its components. First a combative Mario Olmedo, who finished fourth with 1h25m28s fighting bronze to the end. And after him, with the sixth place the young Juan Javier Jiménez Oller with 1h25m59s. The 12th place of Alvaro Gomez with 1h20m03s finished tying the second drawer for Andalusia.

The bronze was for a brilliant MURCIA selection of Alejandro García, Zaid Ait Malek and Santiago Pérez the three pillars of the revelation of the day. A success that also consolidates Alejandro García among the elite of Spanish mountain racing, following the good results noted in previous races. 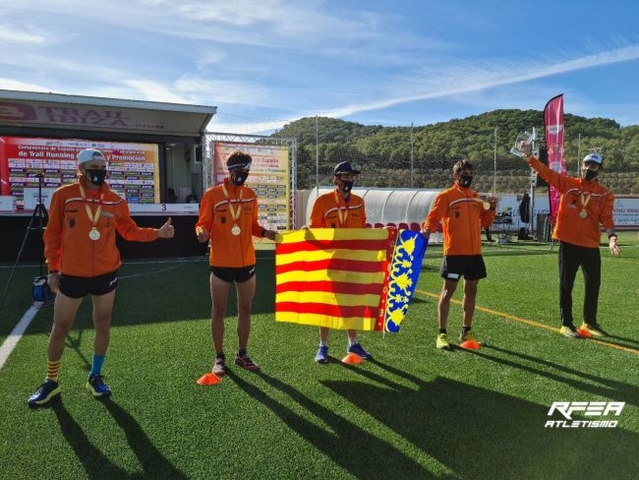 CATALONIA was the favourite to keep the women's title and it did just that, with an outstanding gold. The Catalan team was a dream team with enormous depth. There were two medalists from the last Spanish Trail Running Championship: Spanish champion Gisela Carrión, who won silver today and bronze in El Paso, Marta Molist who added bronze here again. In addition, they are also part of the Anna Commet team, fifth today. But it was Sara Alonso, who was running out of competition by not presenting the Basque national team, who took the overall victory in the women's race.

A well-deserved silver went to CANARIAS, who are becoming a strong force in mountain races. Runners such as Aroa Merino, sixth, Elsa Padrón (12th) and Estela Guerra (13th) are the ones who have made this achievement possible today.

MADRID won the bronze today. The Madrid national team set out to offer this race to athletes with extensive experience in other tests. Thus, the Madrid triplet in goal was composed of runners over thirty years old all, but not well known in mountain races. Thus, Elena García Grimau finished in the top 10, along with veteran Charlotte Coton (11th) and Elena Lorenzo (17th) 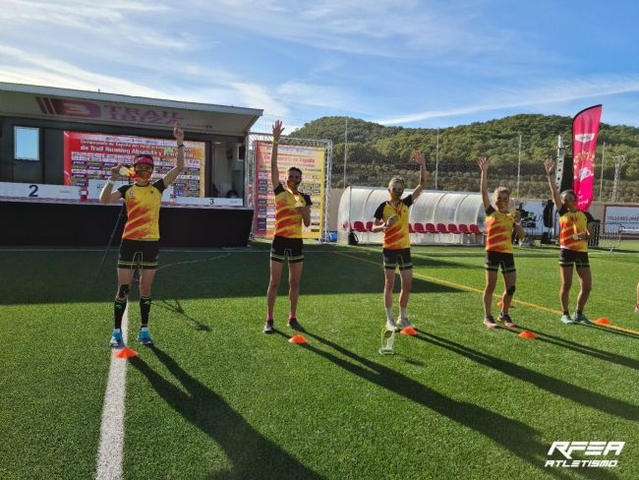