Walmsley and Simion Crowned World Champions at the Long Distance

The World Long Distance Mountain Running Championships enjoyed better weather than the classic distance the day before. The sun shone, but a nice cool Patagonian breeze stopped it from being too hot.

The men’s and women’s fields started together from the centre of Villa La Angostura, with a road section, before heading north along a dirt track and into the forest. The first 2.5k were quite flat, but then it started to climb up through the forest, becoming steep in places. The runners had to endure a fairly high river crossing twice, which proved tricky for some.

The second part of the course then took runners on a long but gradual climb up to the Cerro Bayo ski station, and then the really hard work began. The long, steep and arduous climb up to the summit of Cerro Bayo. A tough snow section at the top must have been energy sapping, then once they reached the summit they had a technical ridge section to deal with on tired legs.  This then led onto a faster, very runnable path, taking them down to the street which headed to the finish line. 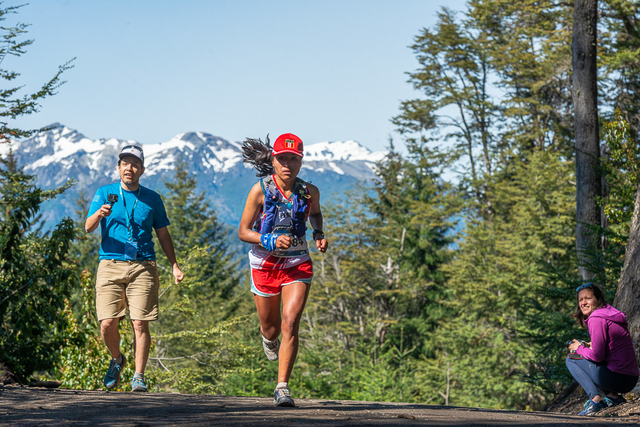 Both the men’s and women’s races were fast at the front. Jim Walmsley struck out into an early lead but he never really opened much of a gap on Francesco Puppi. The next few positions in the men’s race constantly changed, with Hayden Hawks, Oriol Cardona and Jonathan Albon, making it a thrilling race to follow. For the women Blandine L’Hirondel was the early leader, with Ayde Lozoya behind and Sara Willhoit of Great Britain up there, along with Adeline Roche and Cristina Simion. It was all to play for in both races.

Approaching the second half of the course Jim Walmsley still looked comfortable, though he wasn’t able to open a gap of more than a minute on Puppi. By the time they reached the summit of Cerro Bayo they were almost together. It would all come down to who was the better descender. Behind them the race for 3rd place was still on. In the women’s race Cristina Simion had now taken the lead, with Adeline Roche in 2nd place and Blandine L’Hirondel, but they were all close. Again, the descent was going to decide the race.

Jim Walmsley’s speed allowed him to maintain the lead once they hit the flat and he eventually won in 3.12.16, though Puppi never gave up chasing and he was close behind in 3.13.04. They had opened up a gap on the chasing bunch and Oriol Cardona completed the podium in 3.20.24. 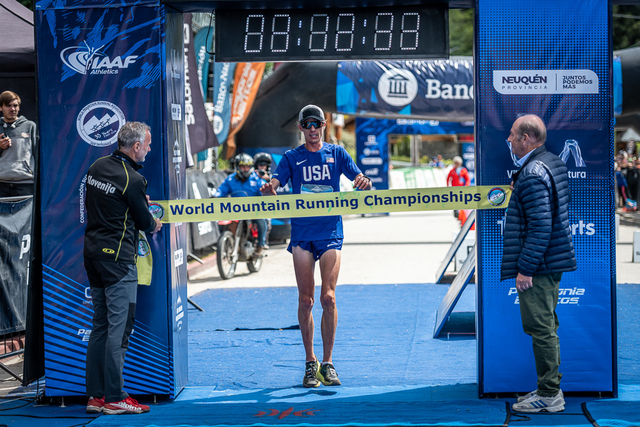 Likewise, Cristina Simion couldn’t be caught in the women’s race, and she brought home the gold in 3.49.57. She looked completely overwhelmed with the victory and it clearly meant a lot to her. There was then a 2 minute gap back to Adeline Roche, who took the silver in 3.51.56. Blandine L’Hirondel completed the women’s podium in 3.52.07. 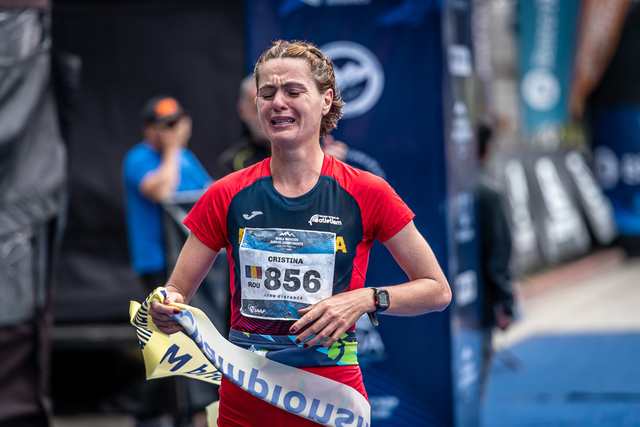 It was a hugely exciting and successful day for mountain running. Patagonia showed that it has a bit of everything for runners, which made for a stunning backdrop for these thrilling races.