Over 360 athletes from 52 countries converged on Portugal for the 5th Trail World Championships last weekend. Many of these athletes arrived at the championships with impressive results from many disciplines of off-road running. Mountain runners, fell runners, sky runners, obstacle course runners, road ultrarunners and of course trail runners, all toed the starting line seeking glory on the 44 km single loop course featuring 2200 meters of climbing and descending.

While the course was primarily on mountain trails, it also featured narrow cobbled streets, a dark tunnel, stone steps, slippery wooden bridges, extremely steep muddy slopes and even sections of fast paved paths. It would take a versatile runner to conquer all these features to become the 2019 Trail World Champion.

On race day, sunny and mild weather greeted runners who drove in from nearby Coimbra to the start / finish in the small mountain town of Miranda do Corvo. At 9:00 AM sharp, the race commenced with a small road loop in the village center to the loud cheers of assembled trail running fans. Only 1 km into the race, the dense stream of runners left the road for a climb up to the hilltop church of Igreja Matriz and into the mountains overlooking the town.

In the womenâ€™s race, newcomer to the French team Blandine Lâ€™hirondel charged into the 16 km aid station at Sr. Piedade with a healthy 7 minute lead. After finishing 2nd earlier this year at Trail du Ventoux and Trail DrĂ´me, Blandine didnâ€™t look like she wanted to settle for anything other than a win. Second into Sr. Piedade was Denisa Dragomir (ROU). Denisa previously finished 3rd & 4th at the 2017 & 2018 World Long Distance Mountain Running Championships. A veteran of Skyrunner World Series races, Sheila Aviles (ESP) was only 30 seconds behind Dragomir into 16 km and in a good position to help the Spanish women defend their team gold medal. 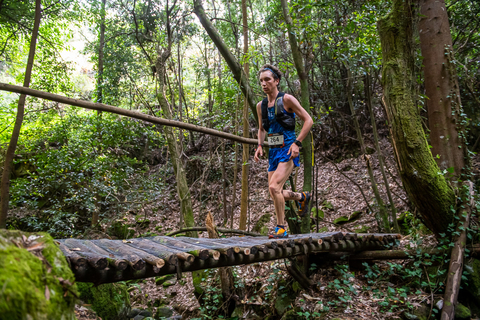 Describing his experience early in the race for corsainmontagna.it, Puppi wrote, â€śThe pace after the start felt blistering but soon after I decided to let the other athletes go. I had to run at my own pace and work my way up to the leaders slowly and patiently if I wanted to have any chance: that was clear since the beginning. As I expected, it was not a race I could control from the front, but rather from the back of the leading pack.â€ť

Perhaps not what he wanted, but Puppi would go on to a strong 4th place finish moving up steadily during the race.

When the dust settled and the top runners crossed the finish in Miranda do Corvo, the 5th Trail World Championship broke more than participation numbers; it was the fastest in history. Menâ€™s winner Jonathan Albon (GBR) finished in 3:34:29 - almost 50 minutes faster than the last â€śshortâ€ť Trail World Championships in 2017. Top in the womenâ€™s race was Blandine Lâ€™hirondel (FRA) who lead from the start and finished in 4:06:17 - almost 55 minutes faster than Adeline Rocheâ€™s (FRA) victory in 2017. 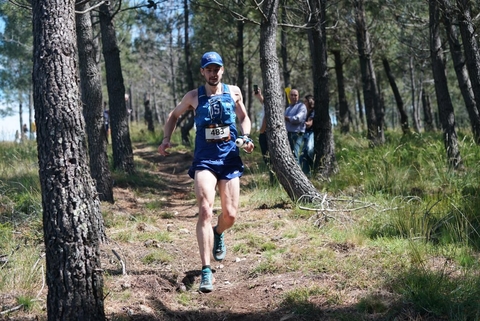 Third place finishers and bronze medal winners were Sheila Aviles (ESP) in 4:15:04 and Christian Mathys (SUI) who while he dropped back from the lead, still held on for a podium spot and crossed the line in 3:40:34.

In addition to the many mountain running athletes at the championship were a number of experienced of mountain running coaches and team leaders. From the United States, Jason Bryant and Richard Bolt have raced in or coached at over 20 World Mountain Running Championship races.

The steady hands of Paolo Germenetto and Tito Tiberti have guided many Italian mountain runners to success across athletic disciplines. Paolo recently earned a coaching award from European Athletics.

Underscoring the impressive course, Tiberti said, "An ever changing course rewarded those runners who proved able to better adapt to almost schizophrenic changes: soft trail then climbing, a bridge then running fast, a jump downhill then a slow uneven rocky part, a ford and then running again, shadow in the wood and sunshine under the wind turbines... It was an unusual and exciting show where mountain runners' speed brought both high quality and uncertainty, making it impossible to predict the race results. Team Italy got back home without medals and that's a news, too! Not the one we hoped for, but in a developing sport environment you cannot take anything for granted and should work hard for a better future (for all). Viva la corsa in montagna e il trail!"

Needless to say, Italy is a perennial mountain & trail running powerhouse and has many medals in its future.

Looking back at last weekendâ€™s Trail World Championships, it was a success on many levels. For the organizers, sponsors, volunteers, teams, coaches and most importantly, the athletes. Regardless of how you label them, trail runners, mountain runners, skyrunners, obstacle course racers or ultrarunners from the roads - they all came to Miranda do Corvo ready to face the same off-road racing challenge. All are now veterans of the Trail World Championships.

Complete race results can be found on this website.